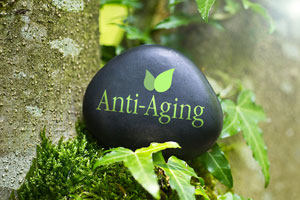 BP-RX was developed to promote healthy blood pressure, cholesterol, arterial health and to increase multiple antioxidants in your body. Additionally, BP-RX may provide a benefit for insulin resistance – the precursor to Type2 diabetes.

Effectively managing all of these health conditions can lead to a longer life. But one benefit usually not found in nutritional or pharmaceutical blood pressure products – is a specific, clinically validated, anti-aging benefit. BP-RX contains not just one but TWO – anti-aging benefits.

Both of these anti-aging mechanisms are found in Gynostemma pentaphyllum used in the BP-RX formula. Gynostemma pentaphyllum – also known as Jiaogulan – was first discovered in two South Central Chinese provinces being consumed as a tea and referred to as the “Immortality herb”- due to the fact that many centenarians (people aged 100 years or older) lived in these provinces.

While little was known about why this tea provided this benefit – years later the reasons may have been discovered. Superoxide dismutase (SOD) was first discovered by researchers in 1968 and referred to as the “youth molecule”. SOD is one of the three powerful endogenous antioxidants naturally produced by the human body (Glutathione peroxidase and Catalase are the other two) and is considered the “master antioxidant”.

Research conducted in the 1980’s by Richard Cutler PhD, at the Gerontology Research Center at the National Institutes of Health in Washington DC, showed that mammals that produced higher tissue and serum levels of SOD, lived longer lives than those with lower SOD levels. Humans have the highest levels of SOD – and live the longest – while rats have the lowest levels and have the shortest life spans. Pigeons and rats share 98.9% of the same DNA – yet pigeons live 12 TIMES longer than rats.

In the largest human double- blind study to date (1,100 subjects) conducted by Dr. Lui Professor of Pathology at Guiyang Medical College in China, those study subjects taking Gynostemma pentaphyllum increased their SOD levels by 116%-282% on an age dependent basis.

This means that the older the test subject was – the higher their SOD level was increased. This stands to reason, because younger people naturally produce higher levels of SOD – while SOD becomes depleted in the body as we age (see more under Antioxidants). 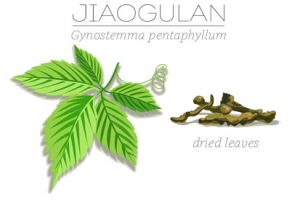 AMPK cells are generally cleaner and healthier cells. Old cells with decreased AMPK activity become clogged with cellular debris which reduces their efficiency and shortens their life spans. These old clogged cells accelerate the aging process and contribute to diseases like Alzheimers and Parkinson’s disease and to the stiffening of vital tissues throughout the body.

Cells that have been energized by AMPK, empty their internal garbage cans of accumulated damaged proteins and then convert these damaged proteins for recycling, into healthy new ones. The result of AMPK re-activation is enhanced efficient cellular activity.

Research over the past few years has shown that it is possible to revitalize AMPK to youthful levels of activation. Experiments have shown the following:

Gynostemma pentaphyllum has been clinically validated to be one of the best ways to safely and effectively increase AMPK activity in your body.

Antioxidants
We use cookies to ensure that we give you the best experience on our website. If you continue to use this site we will assume that you are happy with it.OkRead more
Scroll to top